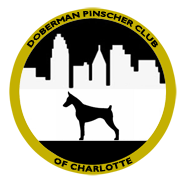 The objectives of the DPCC are:

•to promote, preserve and protect the purebred Doberman Pinscher and to do all possible to bring their natural qualities to Perfection.

•to urge members and breeders to accept the standard of the breed as approved by The American Kennel Club as the only standard of excellence by which Doberman Pinschers shall be judged.

•to do all in its power to protect and advance the interests of the breed by encouraging sportsmanlike competition at dog shows, obedience and agility trials, and other American Kennel Club approved events.

•to conduct sanctioned and licensed specialty shows, obedience trials, agility trials, and Working Aptitude Tests and other sanctioned events under the rules of The American Kennel Club (AKC) and the Doberman Pinscher Club of Americia, respectively.

•to encourage members and breeders to pursue membership in The Doberman Pinscher Club of America and subscribe to the Code of Ethics of that club.

Since January of 1969 the Doberman Pinscher Club of Charlotte (D.P.C.C.) has strived to fulfill its mission through various activities including an annual specialty show, temperament testing, and most importantly, monthly meetings where members network and share a wealth of information with each other.

Our members range from devoted exhibitors and breeders who have made the breed their life’s work, to caring pet owners who simply want to enjoy their Doberman to the fullest extent.

If you'd like to apply for membership in the DPCC, print off a PDF membership application and club ByLaws.